It’s been 15 years since Bikram Yoga San Jose came to be.

Many of you know that I started the yoga 6 months after my mom passed away from Alzheimer’s. It was devastating to lose such a saint of a mom and my best friend. It changed the course of my life.

I have an amazing sister, Sheri, whom I adore. Without her, I probably would have been in a mental ward. And, as I wrote recently, I also had a sister that passed away from Reye’s Syndrome, a deadly occurrence from an unknown allergic reaction to aspirin when she was 7 and I was 9.

What you don’t know is the real kicker that provided the real stimulus to move on with my dream. Yes, I had started yoga and yes, I had given notice at Il Fornaio, a wonderful family of a company that I’d grown up with professionally and probably spent half my life with in hours over the span of close to 10 years.  Yet, I was still lingering there, also a concierge in San Francisco and also working at an art gallery.

You see my years at Il Fornaio were alongside a great woman, Suzanne. She was my assistant, and, when I travelled, would tell me the company gossip. When we had events I had to cut short to catch a red eye back to Chicago to see my mom, she’d look at me and say “I’ve got this” and off I went.  After my mom passed, Suzanne left Il Fornaio. She had much older parents as she was the youngest “accident” in the family. After watching what I went through, Suzanne felt she needed to spend this precious time with her parents in Pasadena before they passed away.

About a year went by when I got a phone call from a mutual friend on New Year’s Day. Suzanne had had an aneurysm on her brainstem on New Year’s Eve. They were at Cedar Sinai hospital discussing organs she could donate – she was 32 years old.

That was it for me.

I did my due diligence and went to Suzanne’s funeral, but I left quickly. I just could not face her parents.

It was really then that I actually shed my indecisiveness.

Michele, What are you waiting for?

We don’t get many answers as to why things occur, but, if you are lucky enough to look back like I am, then you see a higher meaning which dismisses a lot of the pain that you went through. You see the role it’s played in the unravelling of your life… Mine is not without trauma, dysfunction, fails, and flaws but it’s oh so blessed beyond any definition!

I moved out of my home in Walnut Creek and sold literally all of my belongings. One family from Gilroy saw my items on Craigslist, came with a truck and took not only what I offered, but bought everything else too, including my bed. Lying on my bedroom floor, I called my sister and thought to myself how crazy is this – but my faith never waned.

Later, after the lease was signed for our original studio around the corner, the contractor and I would often do work onsite until very late, and one night I find a small silver ring on the cold cement chipped flooring that had the words “faith” wrapped around it.

It’s kind of fun to tell you these things on an anniversary like this. Many of you know me, but many don’t. In case you don’t, my name is Michele and I’m the owner of Bikram Yoga San Jose!

BUT, you all know this place. It looks deceiving- like it’s been built with beams and pipes and walls and flooring and heat but it’s not. It is built on faith,  healing, belonging, friendship, hospitality, inclusivity, acceptance, compassion, trust, unity and endless stories (both mine and yours) coded with something extraordinary!

15 Years of Thanks to Many People

There are some not-so-obvious people in the background – our unsung heroes that keep things running, like Jose Gonzalez,  Jeff Moss, Sohyla Emami, and Robin Fox, and all the work trade and a special thanks to Jill Durschlag and Tonni LeBaron.

Recently Brad was here, our wonderful teacher who helped me see the light out of the dark cloud I was looming in way too long after Chris, our former BYSJ Manager, passed away. I am forever grateful to and for Brad as his fire personality put the flame back in me. In the past two plus years, we’ve grown in stages that would take most businesses 10 years. Because of his empowering words to me, I stood up more and invited in such great people to resurrect and rise our great home.  I’d like to acknowledge Matt and Sarah Newman, Jessica Guinn, Amelia Bostrom and Masha Kouzmenko. And, someone who is not here but you may remember, Josh Biro.

I took Brad’s class recently when he came back to visit, and per usual he brought up his Brad-type phrases. “The millimeter effect”: our progress can be so small in size but has huge effects. The “oh” comments when someone has had an “ah ha” moment,  when we hear something for the first time even though it’s been said every day over and over again. Also this one: “you have to fight.”

I’m not really a big fan of the word ‘fight’ in a yoga class, but then I thought about it more.

Our world does not give us a map to follow filled with instructions to “do life this way.” Life is a myriad of messy situations and how we navigate through them can determine whether you are happy or not. Simon Sinek studies leadership and puts his research efforts in this idea that we all should wake up and do the work we love. He says that “everyday we MUST struggle with decisions that are both selfish and selfless.  It’s not about one or the other, it’s about trying to find the balance as too much selfish, we suffer; too much selfless, we suffer.”

There is this great book called The Tao of Leadership. We read a passage every Monday morning before we start our meeting, and it says that our decisions cannot be this or that but processed by a way. In our 21st century with such advanced technology, sensory overload, and the spiraling of “cleverness” in every subject, how do you know?  How do you make the best, most appropriate choices?

Bikram says over and over again, you have to use the body to reach the mind and only then will spirit come knocking on your door. So doing “silly little postures” in hot room for a very long time (90 minutes) seems far off from The Way to know. But you know as I know, get in a pose, use your breathing, stay with the dialogue and in just 30 minutes you’ve melted in a new realm out of the head and down in there where the real material is – the heart.  Therein lies the voice we seek – the heart knows! The more we come, the more we hear and the more we act from the heart, the better we feel because what’s there is truth, YOU.

The Other and You

Paul Coelho, Brazilian writer, wrote in one of his famous books a story of “The Other” (paraphrased) it says, The Other is the one who taught me what I should be like, but not what I am. The Other believes that it is our obligation to spend our entire life thinking about how to get our hands on as much money as possible so that we will not die of hunger when we are old. So we think so much about money and our plans for acquiring it that we discover we are alive only when we our days on earth are practically done.  And then it’s too late.

The listener then asks:  And you?  Who are you?

I am just like everyone else who listens to their heart:  a person who is enchanted by the mystery of life.  Who is open to miracles, who experiences joy and enthusiasm for what they do.  It’s just that the Other, afraid of disappointment kept me from taking action.

But there is suffering in this life, the listener said, “and there are defeats. No one can avoid them… But, it’s better to lose some of the battles in the struggle for your dreams than to be defeated without ever even knowing who you are and what you are fighting for.”

From the beginning of time we all long for living authentically.  That’s our nature and not alone but side by side with others to encourage.

Emmy Cleaves, Bikram’s friend and confidant for about 50 years now, left Bikram after her first 6 months only to come back from her yoga excursion to all parts of India. She returned with testimony and zeal for Bikram’s practice. Beginning this yoga at age 45, she will tell you a body not managed will turn to junk, a mind not under control will become full of loose screws, which results in a soul nowhere to be found. But with this yoga “what you get is a strong, toned muscular, comfortable, well-functioning body for the rest of your life.” You will improve your self – awareness at the same time. At first, your attitude is hard and unyielding, well so are your muscles. In time, your awareness leads to understanding, which leads to control, which leads to mastery of the physical and the mental. “Realign your spine and all else will reorganize itself.”  And, Emmy goes on to say, the beauty is that this package can take care of it ALL.  If that’s true, what are we waiting for? Let’s do this and do it everyday!

The Story of Our Members

I took some time to reach out to members that have been not only here at BYSJ for most of the 15 years, but have a regular practice almost daily. Here are a few examples of what they had to share:

But, here’s the irony.  I would have never started this yoga, unless it was a hard-core work out.  In fact, for most of us, if it didn’t give us what we wanted first, we would have never stayed so it could give us what we needed.  Additionally, what my friend, Mike Wilhoite (professional football player, linebacker for the Niners and Seahawks) calls “the hardest thing he’s ever done,” is also accessible to someone who has never worked out a day of their life.

Ironically, the yoga can seem so exclusive being 90 minutes, in hot room and so rigorous but instead is so inclusive as it’s never too late, you are never too old, you are never too sick for anyone to start from scratch.  It’s one thing all the time yet different every day, it’s so powerful that it transcends all circumstances.  The yoga doesn’t care where you live, what you look like, beliefs you carry, or any anatomical barriers.  It doesn’t care if you have any moral compass because with enough yoga, you’ll get one – a good RIGHT one. Bikram Yoga is THE tool we need in our disconnected world to bring harmony within so as without. I’m proud to have pioneered something so potent here in San Jose with all of you! With God’s Grace, we can bring thousands of others into our home, accessing their kingdom of health and making the world a better place!

Thank you for trusting in me as you’ve done for 15 years! I’m grateful to all of you not because I own BYSJ but because we show up together in our fight for Self each day – with Toes and heels on the line! 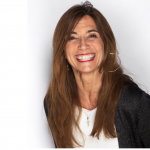 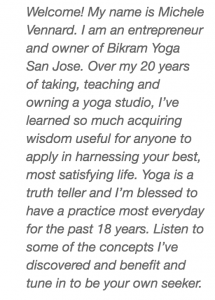